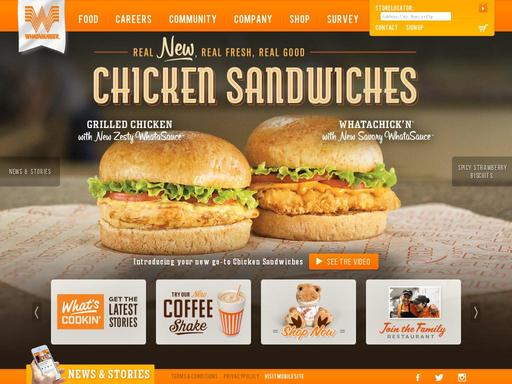 Be the first one to rate! Post Review
See Covid-19 hours and updates in Tyler, TX.

We’ve stuck to what got us here.

Over six decades ago, an adventurous and determined entrepreneur named Harmon Dobson had a bold idea: to serve a burger so big that it took two hands to hold, and so good that after a single bite customers couldn’t help but exclaim, “What a burger!” He named his humble burger stand, located on Ayers Street in Corpus Christi, Texas, “Whataburger.”

Today, our founder’s original vision still inspires everything we do. We’re still family owned and operated. Each and every Whataburger® is still made to order—when it’s ordered. We still use 100% pure beef and serve it on a big, toasted five-inch bun. We still greet our customers with a smile 24 hours a day, seven days a week. And while we now serve hot, fresh food at more than 790 Whataburgers across the country, that burger stand in Corpus Christi is never far from our hearts.

A Man With a Dream.

The golden age of drive-ins and American automobiles was just getting started back on August 8, 1950, when Harmon Dobson opened Whataburger #1. This tiny burger stand offered something people had never seen: a burger that was so big, they had to hold its five-inch bun with two hands. It was an instant success, and Harmon began to expand the business to other markets. In 1955, Harmon married Grace Williamson and became Whataburger’s “First Couple.” Together, they raised three children: Hugh, Lynne and Tom. By the end of the decade, Harmon would open Whataburger #21 in Pensacola, Florida. It was the first Whataburger restaurant outside the state of Texas.

By 1960, Whataburger® had 17 restaurants scattered across Texas, Florida and Tennessee. A year later, the first of the familiar orange and white striped A-frames was built in Odessa, Texas. The menu grew as well, with French fries and hot pies being added in 1962. Tragedy struck the Whataburger family in 1967 when a plane crash took the life of Harmon Dobson. The Dobson family and their extended Whataburger family rallied around and supported Grace as she took over the business.

The ‘70s was a decade of Whataburger milestones. Under the leadership of Grace Dobson, the company thrived and grew. The number of locations doubled to more than 200 restaurants, spanning 12 states. The first drive thru was installed in 1971. The Whataburger Jr.® was added to the menu, as were jalapeños and onion rings. And a new building design, which retained the spirit of the original A-frame, was unveiled. This is the era in which country music legend Mel Tillis started appearing in television commercials for the company, a role that would continue through the ‘80s.

At the end of 1980, Whataburger opened its 300th restaurant. Two years later, three Corpus Christi locations began operating 24 hours a day, seven days a week, much to the delight of hungry patrons. New menu additions soon followed, including the Breakfast On A Bun®, Whatachick’n®—and the now-famous breakfast Taquitos. The beloved Nickel Mug—now a classic piece of Americana—debuted as a promotion which was supposed to last 1-year, but ended up running for 14. And by the end of 1989, Whataburger was serving hot and fresh food at 440 different locations.

A Torch is Passed.

Whataburger saw a change of leadership for the first time since the 1960s as Tom Dobson, Harmon’s son, took over as President and CEO. A host of new menu items was unveiled, including the Whatameal®, the A.1.® Thick & Hearty Burger®, cookies, biscuits, chicken strips and more. The company also passed the 500-store threshold, making it the nation’s eighth-largest hamburger chain. The very first WhataGames, the company’s biennial burger Olympic competition for Team Members, was held. And on May 6, 1999, Whataburger by the Bay opened in Corpus Christi as a tribute to Whataburger’s upcoming 50th anniversary. Boasting 6,000 square feet, stunning water views and a life-size bronze likeness of Harmon Dobson, this flagship restaurant is a fitting tribute to an amazing man.

On August 8, 2000, Whataburger proudly celebrated its 50th anniversary with 575 restaurants in operation and millions of fans all over the country. In 2001, the 77th Texas Legislature officially recognized what Texans had known for more than 50 years: Whataburger is a designated a ‘Texas Treasure.’ New specialty items included the Whataburger Patty Melt and the Honey BBQ Chicken Strip Sandwich. Whataburger Field, home of the Corpus Christi Hooks celebrated a ground-breaking ceremony with Grace throwing out the first pitch. Sadly, in 2005, Whataburger Family Members mourned the loss of “Lady Grace” as she was called by many. Tom continued to honor the legacy of his parents as CEO.

By the company’s seventh decade, Whataburger had grown from a single burger stand in Corpus Christi to a 700-restaurant chain that spanned every state from Arizona to Florida. The All-Time Favorites menu, featuring four of the most loved specialty sandwiches from over the years, made its debut and was greeted enthusiastically by Whataburger fans. Despite all of these changes, we’re still sticking to what got us here. Serving it hot and fresh, 24/7. Treating our customers right. Being proud of everything we do. And never forgetting where we started. We’re still family owned and operated, with Tom, Lynne and Hugh leading the company just like their father and mother did before them.