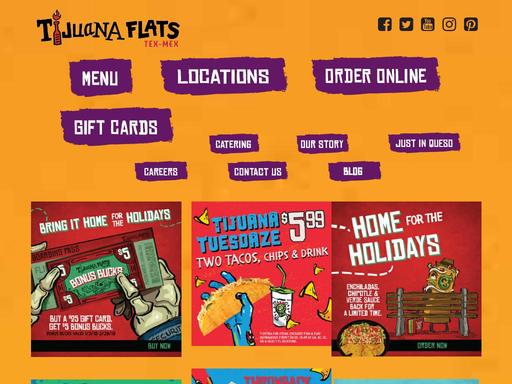 Be the first one to rate! Post Review
See Covid-19 hours and updates in Winston-Salem, NC.

How’d Tijuana Flats become Tijuana Flats? Funny story, really. Back in ‘95, this college kid, Brian Wheeler, walked into a bar. Actually, a bunch of bars. (And restaurants, too.) At first, it was just harmless fun. But over time, the good times got the best of him and just going out no longer cut it. So Brian decided to open his own restaurant despite having never worked in one before (brilliant, right?). Only problem was, Brian was broke. Luckily, his parents weren’t. And after much begging and pleading, his dad loaned him $20,000 & Brian opened the first Tijuana Flats in Winter Park, Florida.

A Dude with a Heart-Burning Desire

While most college grads (yes, Brian graduated from UCF, or so he says) would be stoked just to own their own restaurant, deep down Brian had a burning desire to do more. Turns out, the burning was just hot sauce he’d eaten, but Brian saw it as a sign and created his own line of hot sauces shortly thereafter—the “Smack My Ass & Call Me Sally” brand, which includes some of the hottest sauces in the world.

We Think The Kid’s Onto Something

(Or Maybe He’s Just On Something)

In ‘99, Brian’s success caught the eye of former restaurant industry hotshot Camp Fitch, who left retirement to become partner & chairman of Tijuana Flats. And Camp wasn’t the only one. Remember the dad who reluctantly loaned his son $20K? Yup, Chester Wheeler left a 30-year career at a Fortune 500 company to become CFO of Tijuana Flats. Since then, Tijuana Flats has grown to more than 100 restaurants in six very lucky states.

The People You Attract When You Spend Days Rolling Fat Ones

From the outside, it looked like Tijuana Flats didn’t have a care in the world, but inside, Brian and his Camp care deeply about the people in their company, restaurants and communities. That’s why they attract the best of the best team members who personally engage with guests from the time they walk in to the time they leave. It may be “fast casual,” but everyone at Flats takes the time to give a damn. They go above and beyond to make guests feel comfortable and cared for, even if it means taking an order to a car in the pouring rain because mom has the kids in the car.