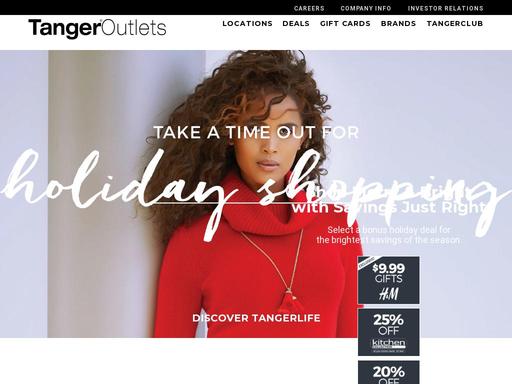 Be the first one to rate! Submit Review
See Covid-19 hours and updates in National Harbor, MD.

Tanger will continue to be a top performing retail REIT by focusing on operating and developing first-class outlet centers that deliver the following:

In 1981, Stanley K. Tanger (1923-2010) pioneered the Outlet Industry by building the country’s first authentic outlet shopping center in Burlington, North Carolina. This was not only the beginning of Tanger Factory Outlet Centers, Inc., but also of a thriving retail venue – the Outlet Industry, which has grown to hundreds of outlet centers worldwide today.

Steven B. Tanger (current Chief Executive Officer as of 2009) joined forces with his father Stanley in 1986 as the company’s fourth employee. Under their leadership, the company prospered and grew to 13 outlet centers by 1992.

Then, in 1993 Tanger led the way again by becoming the first outlet center developer to be listed on the New York Stock Exchange as a publicly traded Real Estate Investment Trust (REIT). Shares are traded under ticker symbol SKT.

Tanger’s Best Price Promise, an Outlet Industry first was originally instituted in 1995. The program offers Tanger shoppers an instant cash refund of the difference if they should find an item purchased at Tanger advertised for less. The Best Price Promise gives Tanger customers’ confidence that they are getting a great deal each and every time they shop.

In October of 2010, Stanley K. Tanger, the company’s Founder died at the age of 87, surrounded by his family. Mr. Tanger’s name was synonymous with outlet centers and he was known as a dynamic businessman, philanthropist, mentor and friend.

Tanger’s portfolio of outlet centers has continued to expand and today includes 43 outlet centers in 22 states coast-to-coast and in Canada. Savvy outlet shoppers look to Tanger Outlets for the biggest selection of first-quality, in-season merchandise, for the latest fashion trends from their favorite brand name and designer outlet stores and so much more. Because consumers love shopping and saving direct from the manufacturer, Tanger centers are major tourist attractions that welcome more than 188 million brand name bargain hunters annually. America knows the value of shopping TangerStyle.

Do you know great restaurants in National Harbor for takeout?
Details