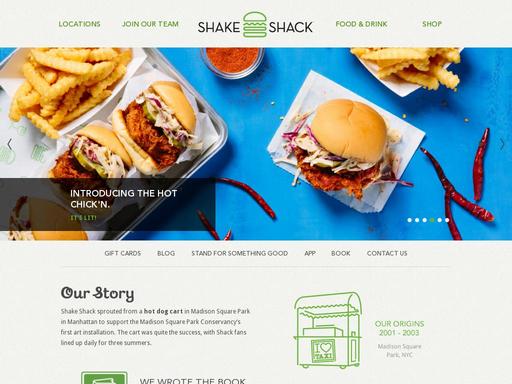 Be the first one to rate! Submit Review
See Covid-19 hours and updates in New York, NY.

We Wrote the Book on Burgers!

In 2004, a permanent kiosk opened in the park: Shake Shack was born. This modern day “roadside” burger stand serves up the most delicious burgers, hot dogs, frozen custard, shakes, beer, wine and more. An instant neighborhood fixture, Shake Shack welcomed people from all over the city, country and world who gathered together to enjoy fresh, simple, high-quality versions of the classics in a majestic setting. The rest, as they say, is burger history.

All aboard! Shake Shack has arrived at Fulton Center on the corner of Broadway and Fulton Street. Located on Level Two, the Fulton Transit Center Shack serves up all the beloved Shake Shack classics to daily commuters and tourists alike. We’re partnering with The Fresh Air Fund, and five percent of sales of our Pie Oh My concrete help their efforts to provide free summer experiences to New York City children from low-income communities.

The Fulton Center Shack is serving breakfast! Check out the menu, available 7-10:30AM on weekdays, here.