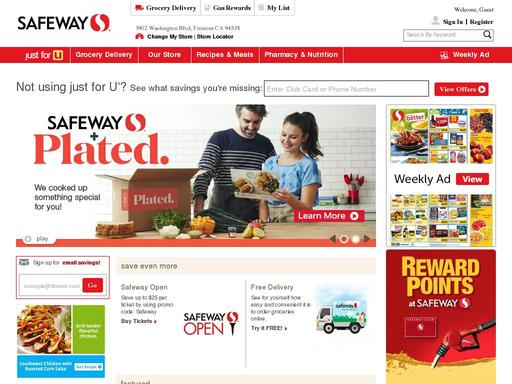 Safeway Covid-19 Hours Updated 3/26: Some of our stores have adjusted their hours to give our teams the time they need to for extra cleaning and to restock shelves. Many stores have now set up 'Seniors Only' shopping times on Tuesdays and Thursdays from 7 AM to 9 AM.

always changing for the better

In 1915, M.B. Skaggs, an ambitious young man in the small Idaho town of American Falls, purchased a tiny grocery store from his father. M.B.’s business strategy, to give his customers value and to expand by keeping a narrow profit margin, proved spectacularly successful. By 1926 he was opening 428 Skaggs stores in 10 states. M.B. almost doubled the size of his business that year when he merged his company with 322 Safeway (formerly Selig) stores and incorporated as Safeway, Inc. Two years later M.B. listed Safeway on the New York Stock Exchange. M.B. did not let the difficulties of the Great Depression dilute his pioneering focus on value for customers. In the 1930s Safeway introduced produce pricing by the pound, adding “sell by” dates on perishables to assure freshness, nutritional labeling, even some of the first parking lots.

M.B. Skagg’s value vision still drives Safeway, though on a dramatically larger scale. In January 2015, our parent company, AB Acquisition LLC, and Safeway completed a merger that created one of the largest food and drug retailers in the country, with over 2,200 stores in 33 states and the District of Columbia, and employing approximately 265,000 people. With Safeway stores in 19 states, our Safeway teams are proud to carry on the tradition that M.B. Skaggs began nearly 100 years ago in that small Idaho town.

All of our stores were founded around the philosophy of offering customers the products they wanted to buy at a fair price, with lots of tender, loving care. We still open our doors every day today with that in mind, and because of it, we run really great stores.