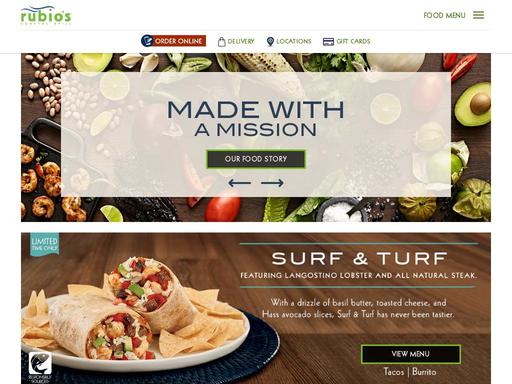 Be the first one to rate! Submit Review
See Covid-19 hours and updates in Sunnyvale, CA.

As a college student, Ralph made regular pilgrimages to Mexico’s best beaches to surf, sun and socialize. It was on one of these trips that Ralph sat down at a seaside taqueria and met his true love. He was hooked on the fish taco.

Several years later, with the help of his entire family, Ralph opened his first Rubio’s. A walk-up stand in Mission Bay, San Diego. It was at that walk-up stand that America had its first taste of the fish taco. Soon, they too were hooked. As word of Ralph’s fish tacos spread, so did his business. One restaurant quickly expanded to three, and before long, San Diego’s best-kept secret was out. Rubio’s started a fish taco phenomenon that spread from coast to coast. Each new restaurant brought not just The Original Fish Taco® recipe, but also Ralph’s commitment to fresh and high quality ingredients. A commitment that has become as synonymous with Rubio’s as the taco that made us a coastal favorite.

Since that day back in 1983, Ralph, with the help of a lot of great people, has sold more than 200 million fish tacos!

People still love the taste of The Original Fish Taco®. And now, as our menu has grown to include responsibly sourced grilled seafood options along with steak and all natural chicken raised without antibiotics, served in tacos, salads, bowls, and burritos, guests have found more new originals to love.

The flavors we prepare in our kitchens today are a combination of our south of the border roots and the influence of California’s coastal waters and farm-fresh ingredients. We still offer our Original Fish Taco®, as well as an array of one-of-a-kind recipes focusing on grilled seafood. Any one of them with some salsa (made daily), rice or chips is guaranteed to make a coastal cuisine match made in heaven. Rubio’s is still based out of San Diego, though we operate nearly 200 restaurants. So next time you’re feeling a little coastal, feel free to come in and kick back, soak up our version of a sunny day, and taste something outside of the ordinary.