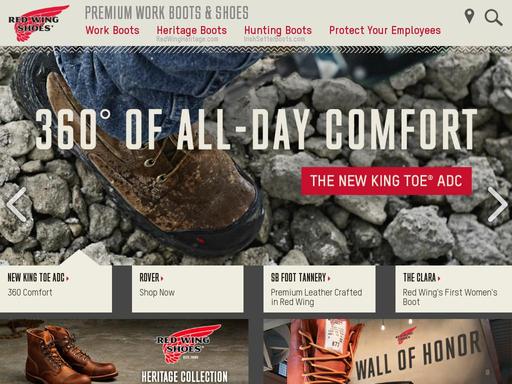 Be the first one to rate! Submit Review
See Covid-19 hours and updates in Saginaw, MI.

Your Saginaw, Michigan Red Wing Store  offers complimentary boot checkups, cleaning and conditioning, along with replacement laces for the life of your Red Wing footwear. Stop in today!

Red Wing Shoe Company manufactures hundreds of footwear styles across six brands. While we make every effort to offer the broadest selection possible, there may be occasions when we don’t have the footwear you need in stock. Fortunately, we can have almost any style available shipped to the Saginaw, Michigan Red Wing Store  in a timely fashion.

Our proven HassleFree ® Safety Footwear Program makes it easy for businesses like yours to honor their commitment to worker safety. Our team of experts will work with you to customize an ideal footwear program that meets both your needs and your budget. The end result is a smooth, seamless experience for you and superior safety footwear for your employees. Stop by our Saginaw, Michigan Red Wing Store, call (989)792-2911 or inquire online  to learn how easily you can set up a HassleFree ® Safety Footwear Program for your business and employees.