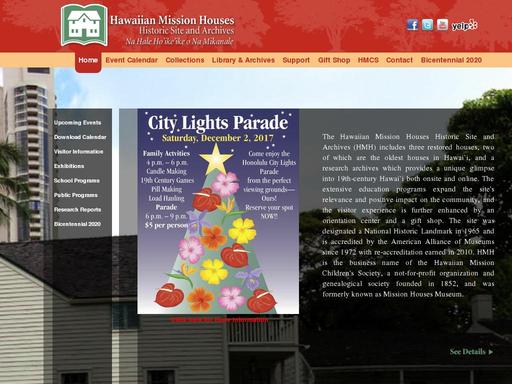 Hawaiian Mission Houses was established in 1923 by the Hawaiian Mission Children’s Society, a private, non-profit organization and genealogical society. It consists of three mission houses that served as homes and workplaces for the first Christian missionaries who came here:

The oldest house in its original location in the Hawaiian Islands, it was shipped around Cape Horn from Boston in 1820 and built in 1821. It was used as a communal home by many missionary families who shared it with island visitors and boarders.

The second oldest house in the Hawaiian Islands, in its original location, this house bears the name of the Mission’s first secular agent in Hawai`i – Levi Chamberlain. In 1831, Chamberlain contracted for the building of this structure, which was to be used as a depository. The building was made of coral blocks cut away from the ocean reef, which were dried and bleached by the sun. These blocks were arranged and assembled to build the Chamberlain House. From this location, Levi Chamberlain was able to plan out and undertake the disbursement of provisions for the entire Sandwich Islands Mission. It now serves as the historic site’s orientation exhibit.

Also built from coral blocks, this structure was completed in 1841 and contains a replica of the first printing press to be brought to Hawaii. It was built as a bedroom annex and used by missionary families and visitors. We now interpret the building as the print shop, which was first built in this general area. In the print shop, which no longer exists, some of the first books and printed materials in Hawai`i were produced. This exhibit shows how early Protestant Missionaries and native Hawaiians collaborated on the production of numerous books and other printed materials first printed in the Hawaiian language. Although there was no written Hawaiian language before 1822, due to the partnership between the Hawaiians and missionaries, within a generation, Hawai`i became one of the most literate nations in the world.