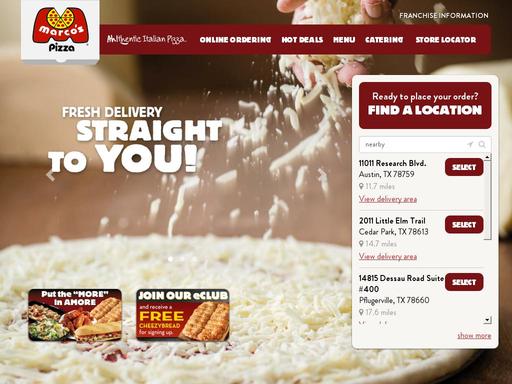 Be the first one to rate! Post Review
See Covid-19 hours and updates in Hermitage, TN.

Headquartered in Toledo,OH, Marco’s Pizza® (Marco’s Franchising, LLC) is the fastest-growing pizza company in the U.S. Marco’s was founded by native Italian, Pasquale “Pat” Giammarco, and is committed to making Ah!thentic® Italian pizza with fresh ingredients. The company has grown from its roots as a beloved Ohio brand to operate more than 800 stores in over 30 states, the Bahamas, India and Puerto Rico. Marco’s is a ranked as a top opportunity for franchising in several publications, but also loved by customers and in 2017 Marco’s was voted the favorite pizza company in America by consumers in a Market Force study, and is fast becoming recognized as one of the top-performing restaurant franchises in the country in addition to have the best Ah!thentic Italian pizza.

Marco’s Pizza founder Pasquale “Pat” Giammarco moved to the U.S. from Italy when he was nine years old and grew up working in his family’s pizzeria. He later embarked on a mission to make high quality pizza on a larger scale using a secret sauce recipe that he developed and refined with his father.

Giammarco established three standards in order to deliver the consistent levels of quality and freshness expected of Marco’s products: dough made fresh daily in each store; a proprietary sauce recipe that blends imported spices and vine-ripened tomatoes; and an exclusive blend of three fresh cheeses (never frozen, unlike many pizza chains).

The first Marco’s Pizza store opened in Oregon, OH in 1978. Gradually, stores opened throughout the Midwest and beyond. The Marco’s Pizza menu broadened as well, to include hot sub sandwiches, salads and Cheezybread for carryout and delivery. Today, there are 800+ Marco’s Pizza stores in over 30 states and four countries.

Dubbed the “undisputed Kings of new store development” by Entrepreneur Magazine, in 2016 Marco’s Pizza added 120 new stores for a total now of more than 800 stores in more than 30 states and four countries, doubling in size in five years and on the fast track to 1000 stores.