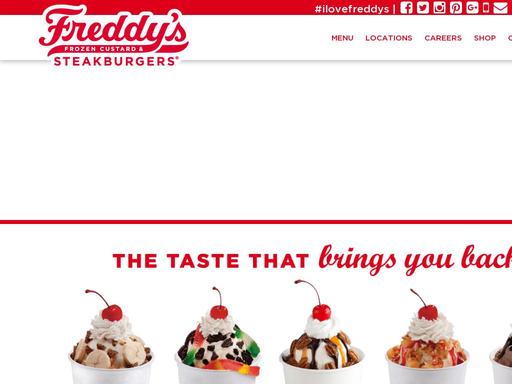 Be the first one to rate! Post Review
See Covid-19 hours and updates in Birmingham, AL.

Enjoying great food without a long wait doesn’t mean your meal has to be cooked before you order it. From steakburgers to sundaes, Freddy’s makes food fresh after you ask for it because that’s the kind of quality you deserve. Take a moment to catch up with friends and family; it’s almost time to eat.

Freddy grew up on a farm near Colwich, Kan., and signed up for the infantry in the U.S. Army at the first opportunity. After years of fighting in places around the Pacific Rim during World War II, Freddy earned the Purple Heart and the Bronze Star for his service, and returned home safely. Following World War II, he worked hard for 56 years while raising his family. Freddy believes he is “the luckiest man in the world.” In between his visits to high school history classes, Freddy actively participates in veterans groups, and takes part in World War II memorial events across the United States.