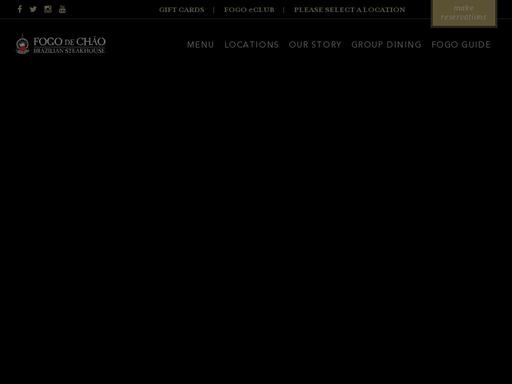 Be the first one to rate! Submit Review
See Covid-19 hours and updates in New Orleans, LA.

A Rich Heritage of the Churrasco

The founders of Fogo de Chão grew up on a traditional Southern Brazilian farm in the Serra Gaucha. It is here that they learned to cook in the churrasco grilling tradition that would become the backbone of our story.

The founding brothers left the quaint, mountainous countryside of Rio Grande do Sul to Rio and São Paulo for formal churrasqueiro training, all while developing the Fogo concept.

This first restaurant, built of a wood structure and nestled in the countryside of Porto Alegre, grew out of an obsessive dedication to quality, investments in the art and culture of the city and a respect for the heritage of the founders’ families.

After gaining a reputation among politicians, businessmen and celebrities who flocked from all over Brazil to taste the experience, Fogo opened its second restaurant in São Paulo.

At the requests of loyal American guests, the Fogo concept was exported to the U.S. with a stateside debut in Dallas, Texas.

Between 1997 and 2013, this pioneering churrascaria continued its expansion in Brazil and the U.S. opening 29 new restaurants.

Thanks to years of hard work and staying committed to excellence, the Fogo de Chão team has opened locations in several major Brazilian and U.S, cities, but the journey is not quite finished. Fogo continues to introduce new flavors and experiences to audiences across the globe.

Located in the luxurious JW Marriott New Orleans on the famed Canal Street, Fogo de Chao is a short walk from the Aquarium of the Americas and Jackson Square. Just steps from Bourbon Street and at the crossroads of downtown New Orleans and the French Quarter, Fogo offers locals and tourists alike a glimpse into traditional Southern Brazilian culture in the heart of The Big Easy.