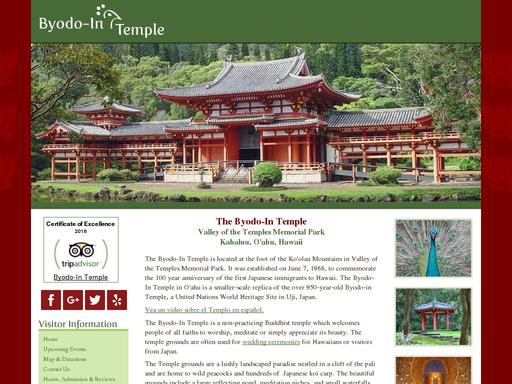 Be the first one to rate! Post Review
See Covid-19 hours and updates in Kaneohe, HI.

The Byodo-In Temple is located at the foot of the Ko’olau Mountains in Valley of the Temples Memorial Park. It was established on June 7, 1968, to commemorate the 100 year anniversary of the first Japanese immigrants to Hawaii. The Byodo-In Temple in O’ahu is a smaller-scale replica of the over 950-year-old Byodo-in Temple, a United Nations World Heritage Site in Uji, Japan.

The Byodo-In Temple is a non-practicing Buddhist temple which welcomes people of all faiths to worship, meditate or simply appreciate its beauty. The temple grounds are often used for wedding ceremonies for Hawaiians or visitors from Japan.

The Temple grounds are a lushly landscaped paradise nestled in a cleft of the pali and are home to wild peacocks and hundreds of Japanese koi carp. The beautiful grounds include a large reflecting pond, meditation niches, and small waterfalls. Visitors describe this destination as beautiful, peaceful, and restful.

The TV series Hawaii Five-O and Magnum, P.I. featured several episodes where the temple is incorporated into the plot. The temple and its gardens also appeared in an episode of the ABC series Lost, "House of the Rising Sun" in season one as the home of Sun’s father.

Directions to Valley of the Temples Memorial Park

The temple is fairly easy to find and it is only thirteen miles from the airport. From the airport, exit onto the freeway and take the H1 Honolulu East. Once on the freeway, get into the far left lane. Follow the sign that says (63) North, Exit 20A Likelike Highway (pronounced leekay leekay, not like like). This exit appears on the right. Stay on this highway. You will pass through the Wilson Tunnel. Once out of the tunnel, there is an astonishing view of the windward side. Take the Kahekili exit (83) on the right. Get into the left lane . You will pass through five stop lights. The temple is on the left side. The Valley of the Temple’s Cemetery is what appears on your left. There is a little hut at the entrance where you may buy flowers if visiting the cemetery. Follow the winding road, and at the end is the parking lot at the entrance to the Temple.

Alternatively, take the Pali Highway over the mountains to Kamehameha Highway using the Kaneohe exit continue to the H-3 past the Likelike Highway. Past Windward community College. Travel another three miles and make a left turn onto Ave of the Temples, Which is the main road through the Valley of the temples Memorial Park. The Byodo-in Temple is at the end of this road. There is ample parking at the entrance to the temple.